Please be aware that the website you have requested is intended for the residents of countries in the European Union. The site may contain information on products or uses of those products that are not cleared, approved, or otherwise authorized in all countries or regions, including the US Food & Drug Administration.
WITH DO YOU WISH TO CONTINUE AND EXIT THIS WEBSITE?
Yes No
Contact Us (781) 301-7474

Learn more about the disease and the patient burden

Sickle cell disease (SCD) is the most common inherited blood disorder. More than 20 million people worldwide suffer from SCD, including approximately 100,000 individuals in Europe.1,2 The worldwide incidence is estimated to be between 300,000 and 400,000 neonates globally each year. About 100,000 Americans live with SCD3, with African Americans being the group most often affected by the disease – one out of 365 African Americans are born with SCD.4 When sickled cells travel through small blood vessels, they can get stuck and obstruct the blood flow. Pain is the most common complication of SCD, and the number one reason that people with SCD go to the emergency room or hospital.5

Red blood cell transfusions are frequently used to treat anemia, acute chest syndrome, stroke, and pain, four complications associated with SCD.6 The number of RBC units transfused varies based on each patient’s need, ranging from occasional transfusions to treat a “pain crisis” to once or twice a month to prevent strokes.7 Blood Transfusions can have serious complications, such as iron overload, a condition by which iron builds up in the body, causing life-threatening damage to the organs.8 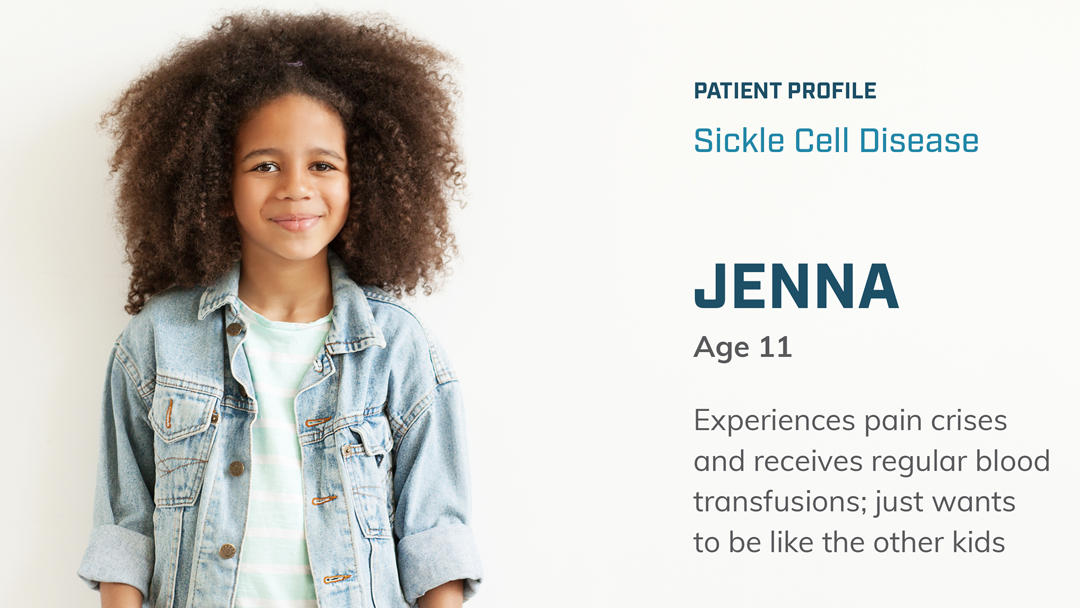 Jenna has experienced several pain crises and is always fearful of having another one. She does not really understand why this is happening to her.

Since having her first stroke at the age 3, Jenna receives chronic blood transfusions to deal with her disease. She relies on her mother and doctors to provide the best care possible to prevent and alleviate the symptoms of her disease. Every 3-4 weeks she has to go to the outpatient clinical for a blood transfusion which takes her away from school and friends.

Kids wonder why she has to go to the hospital so much. She just wants to have fun and be like the other kids.

We are happy to answer any questions about the company, our technology, or our research. Please fill out the form below and we will connect with you!

This website uses cookies to improve your experience while you navigate through the website. Out of these, the cookies that are categorized as necessary are stored on your browser as they are essential for the working of basic functionalities of the website. We also use third-party cookies that help us analyze and understand how you use this website. These cookies will be stored in your browser only with your consent. You also have the option to opt-out of these cookies. But opting out of some of these cookies may affect your browsing experience.
Necessary Always Enabled
Necessary cookies are absolutely essential for the website to function properly. These cookies ensure basic functionalities and security features of the website, anonymously.
Functional
Functional cookies help to perform certain functionalities like sharing the content of the website on social media platforms, collect feedbacks, and other third-party features.
Performance
Performance cookies are used to understand and analyze the key performance indexes of the website which helps in delivering a better user experience for the visitors.
Analytics
Analytical cookies are used to understand how visitors interact with the website. These cookies help provide information on metrics the number of visitors, bounce rate, traffic source, etc.
Advertisement
Advertisement cookies are used to provide visitors with relevant ads and marketing campaigns. These cookies track visitors across websites and collect information to provide customized ads.
Others
Other uncategorized cookies are those that are being analyzed and have not been classified into a category as yet.
SAVE & ACCEPT